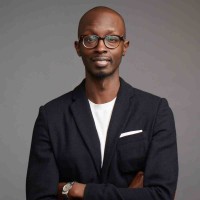 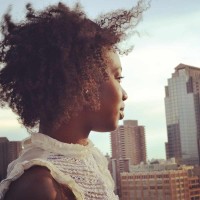 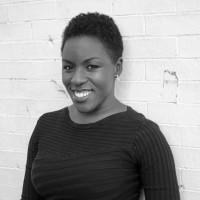 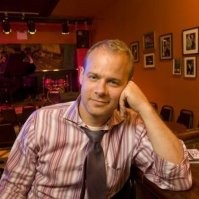 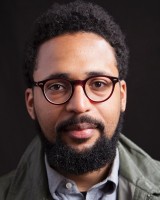 Each bout will be initiated with the intervention of Jazz Historians and Ethnomusicologists placing the Jazz Houses in context and setting the tone for the contest. Here's the line up of talent:

Mathew D. Morrison_writing for our Bed Stuy performance at Eubie Blake's Place
Matthew D. Morrison, a native of Charlotte, North Carolina, holds a Ph.D. in Musicology from Columbia University. He completed a masters in Musicology at The Catholic University of America and was a Presidential music scholar at Morehouse College. While at Morehouse, Matthew actively pursued performance as he studied violin and conducting. Matthew was struck by the unique cadre of professors and students at Columbia University, and subsequently pursued musicology under the direction of his dissertation advisor, George Lewis, and faculty advisor, Ellie Hisama. In addition to his graduate pursuits, Matthew has served a Editor-in-Chief of the peer-reviewed music journal, Current Musicology, where he published a special issue on Race, Sound, and Performance (Spring 2012), featuring an interdisciplinary group of scholars writing about the sounds of music in society. His published work has appeared in publications such as the Journal of the American Musicological Society, the Grove Dictionary of American Music, and on Oxford University Press's online music blog. He is currently the Dean of Faculty and Academic Affairs for the W. E. B. Du Bois Scholars Institute at Princeton University. Matthew also curates and contracts a variety of performances featuring some of the most dynamic musicians (of color, in particular).

Matthew's current book project, American Popular Sound: From Blackface to Blacksound, considers the implications of positing sound as a major component in both individual and societal identity constructions -- specifically racial formation. Music, as the soundtrack to daily life, serves as a central site to interrogate the ways in which race is heard, formed, and interpreted within the political and cultural structures of society. As such, Matthew seeks to unpack the ways in which the racialization of sound is central to how humans have come to imagine themselves and other(s).

Aja Burrell Wood is a Harlem based ethnomusicologist from Detroit who teaches African American music at The New School and Brooklyn College Conservatory of Music. Her work includes research on musical community amongst black classical musicians, jazz in the digital era, music and civic engagement in Harlem, and other related genres of the African Diaspora such as blues, hip hop, soul and West African traditions.

In the field of arts presenting and cultural planning, she has worked with Wynton Marsalis Enterprises, Dianne Reeves, Revive Music Group, The Sphinx Organization, Detroit Sound Conservancy, and Gate Pass Entertainment. She is currently working to complete her doctorate at the University of Michigan, School of Music, Theatre & Dance.

Fredara Hadley_writing for our Queens performance at Cannonball Adderly's Place

Hadley has presented work at major conferences including annual meetings of the Society of Ethnomusicology, the International Association for the Study of Popular Music (IASPM-US), Experience Music Project’s Popular Music Conference, the Association for the Study of African American Life and History, and South by Southwest. Her research has been published in the Encyclopedia of African American Music, Okayplayer, and Urb magazine. Hadley has also completed research for arts organizations including Carnegie Hall, 651 Arts, the African Burial Ground Monument, and the Brooklyn Academy of Music.

Todd Bryant Weeks is part of the permanent staff of Local 802 as the union’s jazz and teaching artists rep.

Weeks is experienced in both areas. As a trumpeter and harmonica player he performed and recorded with several Chicago and New York area bands in the 1980’s and 1990’s. He taught jazz history, intro to music and a course on Shakespeare at Rutgers University (Newark) and at Bard College.

A member of both SAG and Equity, Weeks earned a B.S. in speech from Northwestern University where he also studied acting. From 1986 to 2000, Weeks worked as a professional actor and appeared in a variety of roles in regional theatre, film and television. In 1991 he starred in “Bix: An Interpretation of a Legend,” a film about trumpeter Bix Beiderbecke. In 1999, Weeks wrote, produced and performed in his full-length play “Rain From Out of the Blue,” about the last days of Chet Baker.

In 2004, Weeks earned an M.A. in jazz history and research from Rutgers. He has written articles on jazz for Uptown magazine and the Annual Review of Jazz Studies. His biography “Luck’s In My Corner: The Life and Music of Hot Lips Page,” published by Routledge Press, will be in print in 2008.

Kwami Coleman is a pianist, composer, and musicologist specializing in improvised music. His research interests include experimental music history, jazz history, the history and music cultures of the African Diaspora, the political economy of music, music technology, aesthetics, and cultural studies. Kwami is currently working on a monograph of Miles Davis and the jazz avant-garde and articles on black musical avant-gardism and historiography, the pianist/composer Andrew Hill, and the authenticity wrought by locality in African American music culture of the last century. He is also actively engaged in several music projects including his own recording of original compositions for small ensemble. Kwami is a founding member of the Afro-Latin@ Forum, a non-profit organization devoted to the study and increased visibility of Latinos of African descent in the United States, now housed in NYU’s Steinhardt School.