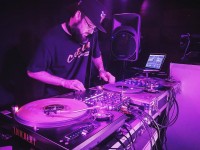 Each Saxophone Bout will be activated by DJ mixes keeping the players on their feet.

D Spliff has been One with the turntables since the age of 12. While developing his style, his influences ranged from Grandmixer DXT, Dj Fuze, Dj Jazzy Jeff, Mister Magic (RIP), Kool Dj Red Alert, Silver Surfer, Clark Kent, Pete Rock, Chill Will, Roc Raida (RIP), and FunkFlex, in just about that order. Being a self-taught Dj (meaning no videos/books/ schools), he pretty much learned different skratches on his own.

Spliff later began finding his way into the DMC and Guitar Center Spin-off Battle circuits, where he advanced to many state finals, a Regional final in Washington DC, and judged such battles along side legends such as Jazzy Jay and The Awesome Two (Special K and Teddy Ted). While living in Bayonne, another Dj (Dj Daluzion bka Dj Hardline) moved into the downstairs part of his house where he learned the basics on how to spin Drum'n'Bass / Jungle music. It was at this point Spliff became an 'all-around Dj', spinning and remixing basically anything that caught his ear, while always keeping it the essence of the Hip Hop culture - always skratching, always mixing, and forever making heads nod and feet move.

Dre Love_
3 of the bouts were performed with mixes created as collaborations between Dre Love and Justin Randolph Thompson.
Andre Halyard a.k.a. DRE LOVE, born in “Queens”, New York.
From an early age was fascinated by all the disciplines that were then traced under the Hip Hop culture, from dance to turntablism, up to rap and beatmaking.

Since 15 years, Dre lives and works in Italy where he had the opportunity to collaborate on numerous projects including: Radical Stuff, Neffa e i Messageri della Dopa, DJ Enzo, Gopher D, Reggae National Tickets, Irene Grandi, Almamegretta and Alex Britti, just to name some.
His scratchy voice and the “easy going” attitude led him to have an immediately recognizable style, solar and refined.
Aware rhymes, acid-rap improvisation, funky grooves, soulful and intimate vocals live together in his music, made up of tributes to the Afro-American tradition and the European electronic experiments.